Served as Captain and paid the 1781 Supply Tax

He married his wife Suzanne Schryer circa 1773 at Hanover, York County, Pennsylvania. Abraham and Suzanne were the parents of seven children: John; Abraham Forney/Furney; Catherine; Mary (Polly); Susanna; Fredrick and Sophia. All lived to adulthood and left descendants. Abraham and his wife Suzanne are buried in the Old Cadiz Cemetery in Harrison County, Ohio, next to their daughter Polly and their son-in-law Charles Timmons, also a soldier of the American Revolution. 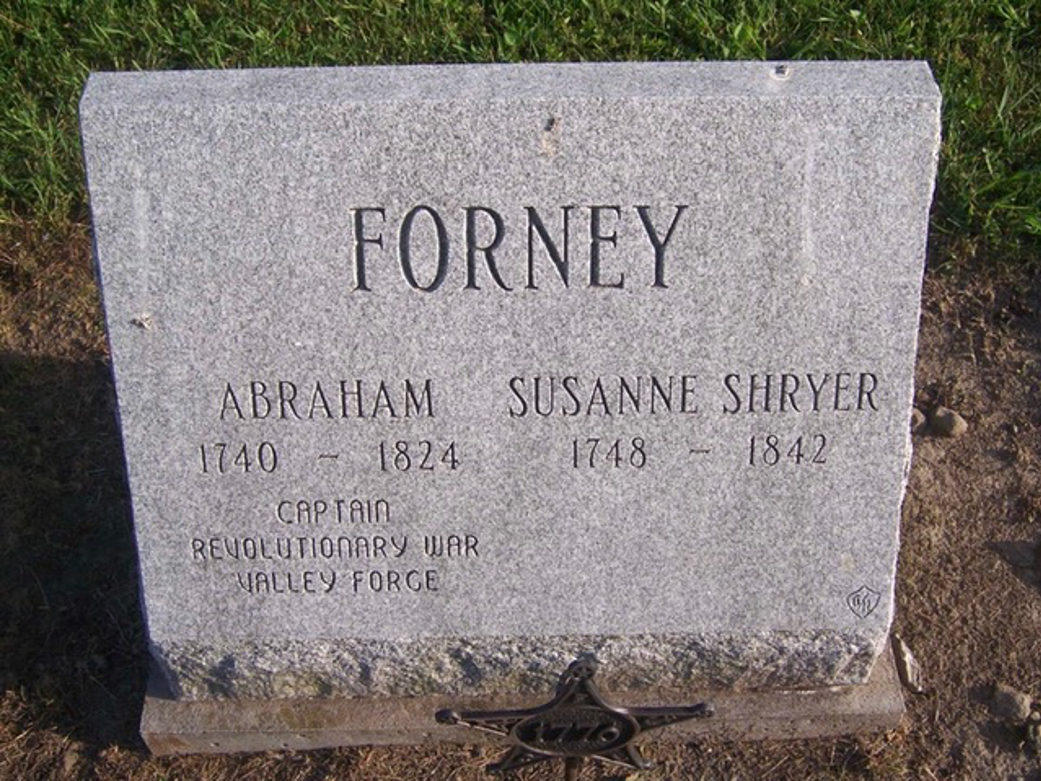 Captain Forney began his service in the Revolution in 1777 while living in Germany Township, York County, Pennsylvania.

Forney was a descendant of a large family of French Huguenots who fled persecution in the 1680s with the revocation of the Edict of Nantes by King Louis XIV, which had, up until that time, protected the rights of Protestants. The family lands in France located near the Swiss border, in the Provence of Ain approximately 20 miles from Geneva, allowed for an easy escape. The Forney family, originally Ferney, were chevaliers/noblemen who served the kings of France since the middle ages. Members of the Ferney family sold their land and fled to Switzerland and Germany where they changed the spelling of their name to accommodate Germanic dialects. They lived in peace and security for several generations before coming to Pennsylvania in the early part of the 1700s to seek their fortunes and purchase land.

Once in America, the Forney family flourished; they became community leaders, fought in the American Revolution and dedicated themselves to their Protestant faith. Abraham Forney followed the motto of his ancestors, “A Deo lux nostra – Our light is from God,” and he remains a role model for his descendants.