Born in France in 1734, Antoine Paulin started his military career as a private and enlisted for service under Louis-Joseph de Montcalm. His regiment landed in Quebec and fought with distinction during the French and Indian War, not only against the British but also against the winters and strangeness of a new land.

After serving for three years under General Montcalm and participating in victories at Fort William Henry (1757) and Fort Carillon (1758), Paulin was present at the Battle of the Plains of Abraham (1759), where Montcalm was mortally wounded, leading to a British victory and the signing of the Treaty of Paris (1763) which ended the Seven Years War and caused France to surrender its territories in North America to Great Britain Postcard (circa 1905) depicting the original placement of the D.A.R. "Monument of the Soldiers of the War of the Revolution" in Fishkill, NY. 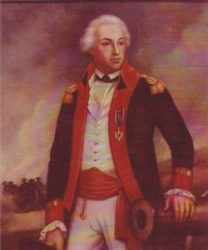 Paulin began his Revolutionary War service at the age of 42, joining as Captain of Independent Company of Canadian Volunteers under the command of Colonel Moses Hazen, who had been his adversary during the French and Indian War.

As a Catholic Frenchman, Paulin faced skepticism amongst compatriots in the Continental Army but served with distinction in this regiment, nicknamed “Congress’ Own” and “Hazen’s Infernals.” He led a scouting party into Canada to gather intelligence prior to General Washington’s abandoned invasion of Canada; he fought alongside Washington at Staten Island, Germantown and Brandywine; was on duty during Benedict Arnold’s execution; and he was part of the regiment Lafayette chose to lead the charge at Yorktown. Both Paulin and Lafayette came from the same region in France, so they shared a particularly close bond.

In 1782 he received land in recognition of his service and built a log cabin near Champlain, New York for his wife, two sons, and four daughters. Paulin became an American citizen, and he joined Washington as a member of the Society of Cincinnati. He died on September 7, 1813, just as war between the British and Americans erupted again. With no Catholic cemetery available, he was buried in a private plot on a local farmer’s land. According to family lore, upon seeing military ships on Lake Champlain Paulin cried, “If I were still young, I would be in this war too!”