Josiah’s family emigrated to Chester County, Pennsylvania, from Wales in 1755, settling in the area of what is now West Chester.

He served in the Continental Army along with brothers David and John. 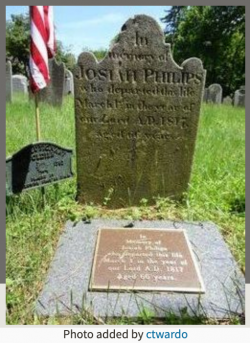 Josiah 's brother John's grave; John is buried to the right of Josiah. He was member of the 7th Battalion Chester County Militia.
❮ ❯

During the winter of 1777–-1778, while George Washington was encamped at Valley Forge, Josiah and a friend, John Dowlin, walked from their homes to the General’s headquarters. Finding him seated under an oak tree, they asked to be enlisted in the army, and the General replied, “We do need soldiers, boys, but some must stay at home and attend to things.”

Washington was pleased with their patriotism, however, and suggested that they might be scouts. Josiah eventually went on be become a lieutenant in the Continental Army. His daughter, Hannah Philips Stille Eaches, was Chester County Chapter’s only Real Daughter, approved May 2, 1894 at the age of 92 just three months after the Chapter was chartered on February 20, 1894. Josiah is buried at Vincent Baptist Churchyard, Pikeland Township, Pennsylvania.