The Atlanta Chapter, the second oldest NSDAR chapter in the United States, received its charter April 15, 1891. The chapter’s core objectives are research and preservation, fostering patriotic ethics, supporting veterans and active military, and promoting education. We are proud of our rich heritage and diverse membership.

A true heroine of the American Revolution, Nancy Hart was a larger-than-life personality who became a patriotic legend.

Nancy Ann Morgan, was born in 1747 in North Carolina.  Nancy was six feet tall with a muscular build and folklore describes her as having red hair, crossed eyes and a small pox scarred face.  She married Benjamin Hart around 1760 and the couple had least eight children.

Sometime in the 1770s, the family moved to South Carolina and then into the Broad River Valley region of Georgia. She was known for her fierce independence, aggressive nature and willingness to risk her life in support of the revolutionary cause by spying on the enemy. She captured Tories, provided critical intel in the Battle of Kettle Creek, and protected Whigs. Kettle Creek monument. Nancy Hart disguised herself as a simpleminded man and spied on a nearby Tory camp. She passed along information that aided the Whig victory at the Battle of Kettle Creek. Credited to Georgia Encyclopedia. Lake Hartwell is named in honor of Nancy Hart. Credited to Georgia Encyclopedia. 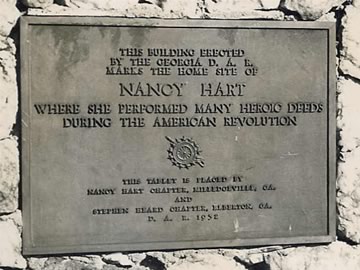 The best-known story of Nancy’s heroics is about her capture of Loyalists.

A group of Loyalist soldiers came to her home to question her about an escaped Patriot and demanded a meal. Nancy allowed them inside and fed them ample food and drink. The soldiers caught her and daughter Sukey hiding their muskets. Nancy killed one approaching Loyalist and held the others hostage while Sukey informed Benjamin and their neighboring Patriots. When Benjamin and neighbors arrived, she insisted the Loyalists be hanged. In 1912 construction crews found five or six skeletons buried neatly in a row while grading a railroad site less than a mile from the old Hart Cabin. A few of the skeletons’ necks were broken, which suggested they had been hanged. The skeletons were determined to have been buried for at least 100 years.

The Hart family moved to the Brunswick area in the 1780s where Benjamin died shortly thereafter. Nancy lived with son John Hart in the Athens area until they moved to Henderson County, Kentucky, in 1803. Nancy lived there until her death in 1840.

In 1932, DAR erected a replica cabin on the approximate site of Hart’s frontier cabin, using chimney stones from the original cabin. Lake Hartwell and Hart County, Georgia, and its county seat, Hartwell were named for her. In 1997 Hart was inducted into the Georgia Women of Achievement, which honors female trailblazers of Georgia.