Third Regiment of the Virginia Line

Robert Rankin’s career encompassed both military and civil service. He was born in Virginia in 1753 and joined the Third Regiment of the Virginia Line in 1776, participating in the battles of Germantown, Brandywine and Stony Point, as well as the siege of Charleston, where he was captured.

After being exchanged, he was promoted to Lieutenant, serving until the war’s end. He married Margaret (Peggy) Berry, on October 1, 1781, during a furlough. Their children were Joseph, William Marshall, John Keith, Frederick Harrison and Margaret Williams. Rankin participated in the Siege of Charleston 1780, here painted by Alonzo Chappel Rankin participated in the 1777 Battle of Germantown; here American forces lay siege to the Chew house during the battle. 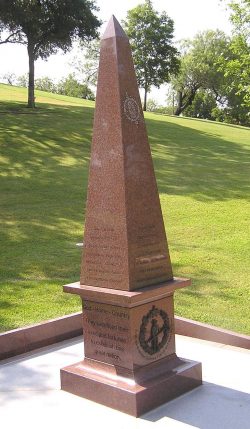 In 1784, the family moved to Kentucky. Two years later, Rankin was named by the Virginia Legislature as one of nine trustees for newly established Washington, Bourbon County (later Mason County), Kentucky.

In 1792, he served as a delegate to the Danville Convention, which drafted Kentucky’s First Constitution. He was an original member of the Society of the Cincinnati founded in 1783 to preserve the ideals and fellowship of officers of the Continental Army.

The Rankins moved to Mississippi Territory in 1811. In July 1828, at the age of 75, Rankin applied for a Revolutionary War pension. In the mid-1820s, Mexico began to approve colonization contracts in Texas for various empresarios. In 1832, the Rankins moved to Joseph Vehlein’s Colony in East Texas. In October 1835, Rankin received a land grant of a league (4,428 acres) and a labor (177 acres). He became a prominent citizen in the affairs of the nascent Republic of Texas, assisting Sam Houston with relations with the American Indians in East Texas during the Runaway Scrape of 1836.

Toward the end of 1836, when he was 83, Rankin became ill. He and his wife moved to St. Landry Parish, Louisiana, where he died on November 13, 1837. His body was brought back to Texas, some 250 miles, a 20-day trip by wagon. He was buried in the Old Butler Cemetery in Cold Spring, San Jacinto County. On June 11, 1936, Rankin’s body was moved to the Texas State Cemetery in Austin, as part of the Texas Centennial. His name now also appears on the Texas DAR Patriot Monument in the State Cemetery.